I’ve spent about a week with the new version of ChemDraw now and have to say that this is probably for me the biggest feature leap for the product since Scifinder integration. My test machine is a comparatively old kit and it has run perfectly well. I should point out again, as I have noted before, that when these new ChemDraw versions come out, they are checked and certified for compatibility with the latest, shipping version of the Windows and Mac operating systems. On Mac, this means Sierra, as High Sierra was only released last week. Whilst I can’t foresee any reason why ChemDraw 17 wouldn’t run under High Sierra, it is not supported at this time. I normally expect formal certification for new OS’s in a *.0.1, *.1 or *.2 release.

The headline features of the new version of ChemDraw are new enhanced Hotkeys, HELM support, Document Tagging (metadata), and compatibility with the latest 64 bit Windows systems. But of course you all want to know one thing: Does it support round-trip editing with Word? In a word – Yes (but more on that later). This short review just covers the new features in the ChemDraw Professional application, which forms just a part of the ChemOffice Suite. As with previous versions which I have covered before, various packages are available for Macintosh and Windows PCs at different price points and features lists. The list of versions at the PerkinElmer SciStore is to be found here.

The feature that I’m most excited by are the new enhanced Hotkeys. The first thing you’re going to want to do is take a look at the ways Hot Keys have been improved to make drawing of molecules much, much faster. Helpfully, Perkin-Elmer have provided a handy cheat sheet. It’s available under File -> Open Samples-Enhanced Hot Keys Cheat Sheet.

These enhanced shortcuts will, with practice make drawing structures so much faster. I recommend printing that Cheat Sheet out, laminating it and sticking it to the top of your monitor or pinning it above your desk. Take some time to learn the most common ones such as “3” for a benzene ring and “6” for cyclohexyl. If a significant chunk of your life is spent drawing and editing structures (think thesis writing!) then this will save your hands from repetitive back-and-forth mousing to click on template icons. PerkinElmer and Chemistry World are running a Webinar on the new ChemDraw 17 on October 24th at 4pm (UK time), so I’d check that out if you want to see this in action.

Actually, while you’re looking at that Samples menu take some time to look at some of the others that are included there. Most of these have been there before but they are worth reiterating as really useful starting points for many types of complicated figures. I particularly like the Grignard reaction summary slides made by Roman Valiulin (@RomanValiulin), and the GPCR pathway templates which you can use as a starting point for any signalling pathway you care to draw.

Also new in ChemDraw 17 is a really neat new Reaction Hotkey feature. Lets say you have a simple 3 step synthesis with a core component. To generate a quick reaction scheme, simply select any object, hold down the command key and use an arrow key to automatically copy-paste a duplicate molecule in the direction you chose, including an arrow. So in the example below I drew the initial biphenyl, and then used “Command-Right Arrow” to create the first reaction, then  “Command-Down” and  “Command-Left” to generate the other two elements of the scheme. I then went back and using the hotkey “1” added a methyl group which was to become the changing element at the para position. The amino and iodo groups can be added without clicking and editing the newly created atom by simply using the “n” and “i” hotkeys respectively in mouse-over mode. The nitro group was the only thing that had to be edited manually. 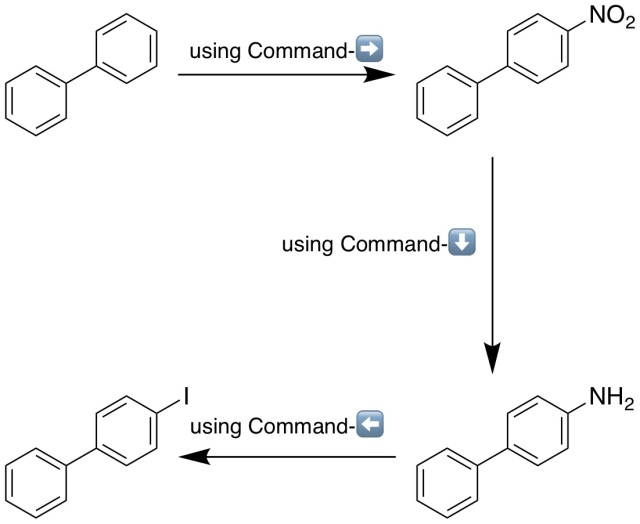 What is HELM? Think of it as a kind of SMILES for biomolecules. Chemists use SMILES strings as a convenient way to move chemical structures from one format to another, or from database to database. Typically SMILES notation is used for small molecules although they can be used for larger biomolecules. The HELM project was started by scientists at Pfizer as a way of getting complicated biomolecules and their derivatives into a searchable form for corporate compound databases. The HELM project is trying to provide a way of systematically representing complicated biomolecules such as post-translationally modified proteins, peptide-DNA/RNA conjugates, glycosylated proteins, cyclic peptides and all of the above containing a range of synthetic and semi-synthetic amino acid monomers, and fluorescent tags.

Chemdraw now provides a way of creating and sharing HELM strings for these systems. If you’ve ever used ChemDraw’s peptide or DNA drawing tool (The BioPolymer Toolbar), the new HELM tool will feel familiar. The tool now provides tabs with which you can create the components of your molecule, lets say a short peptide sequence and a fluorescent tag as separate objects. In the sequence of pictures below below I have drawn hexaleucine, and an Alexafluor tag (Step 1), and then connected the objects using normal chemdraw bonding methods (Step2). Then using the Expand label tool (Step3) you can see the full molecule (Step4).

There are a few quirks in the HELM database currently. For example in the the CHEM tab of the HELM toolbar below, if you look closely you will see a few items that are named somewhat differently. For example the shortcut for adding an Alexafluor tag to a peptide has the abbreviation Alex and the mouseover name calls it Alexa Fluor 488 NHS ester, which as peptide chemists know is the reagent used to introduce an AlexaFluor tag (The N-hydroxysuccinimide ester), not the name of the tag itself. There are also somewhat confusingly two chem entities abbreviated chol. 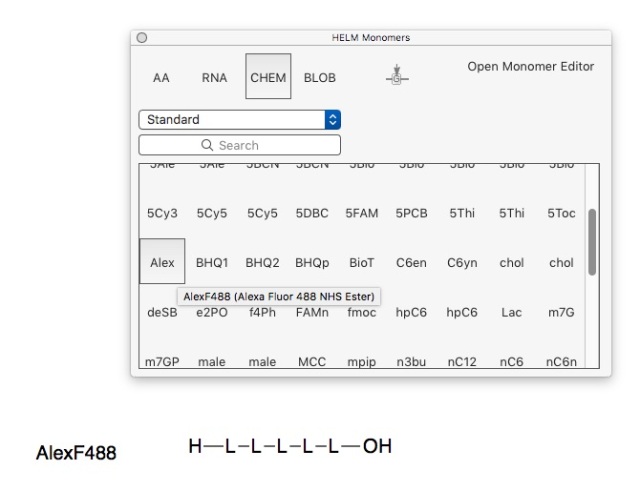 Step 1: Using the HELM toolbar to draw the components as separate objects

Step2: Draw the bond between your desired positions

When you expand the abbreviations, ChemDraw also leaves a small label adjacent to each element (which I normally immediately delete)

Step3: Using the Expand Label and Clean up tools. 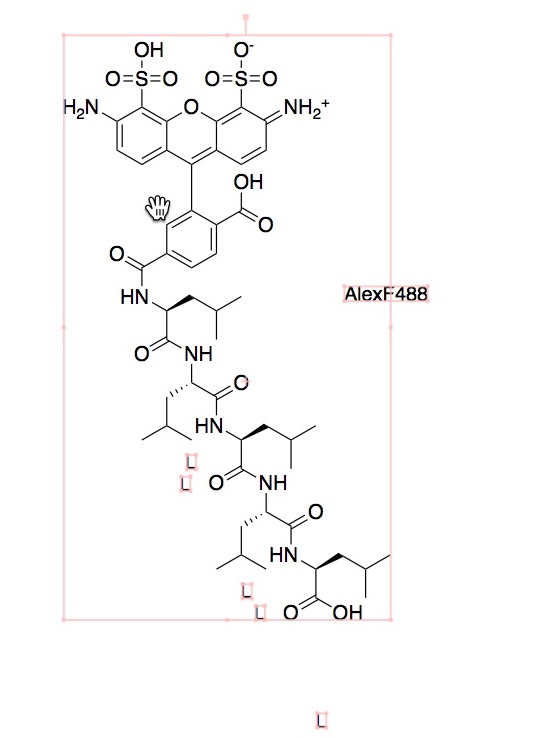 Step 4: The tagged peptide structure after clean up

Document tagging is a way of adding user-defined metadata to your ChemDraw documents, to enhance their searchability.  It is invoked in ChemDraw 17 from the Edit  -> Document Properties menu. If you have started from an empty document and not a corporate template then everything you see in the initial dialog is empty. There are no predefined fields so you can add items to the list pretty much as you want. I can imagine that in corporate settings there may be fields for user, compound identifiers, Project codes, company and division name etc. When you add a property, you can define it as being either optional, recommended, or compulsory to have the field filled.

In academic settings this feature may be less rigorously adhered to as I can see that it would take a great deal of compliance. I can see the potential benefits though in chemistry groups where more than one person is working on a project. You could set project keywords, and you of course want to know who created the document in the first place. On their product page, Perkin Elmer note that these metadata are searchable by third party software including Attivio and Elastic. It will be interesting to see if they will also be searchable from within MacOS (Spotlight Search) or Windows Desktop Search.

Once again, PerkinElmer and Chemistry World are running a Webinar on the new ChemDraw 17 on October 24th at 4pm (UK time), during which they are sure to be showcasing these features live.

Whenever a new version of ChemDraw comes out the first question I get asked is always “Does it break round-trip editing with Word?” If I may steal for a moment a paragraph of my initial review of the 2016 release:

Much of this review is concerned with it’s interoperability with Microsoft Office 2011 (specifically Word), as probably the vast majority of theses and papers in (organic) chemistry written on Macs would be written with this or older versions of Word as leapfrogging software package upgrades have a long, and sometimes chequered history together on the Mac. For my previous posts on this subject see here, here, here, and here.

I am happy to report that this new version of ChemDraw does support round-trip editing with both Office 2011 and 2016 (as part of Office365). It behaves exactly as expected. Objects you’ve pasted in previously can be copy-pasted back into ChemDraw and edited, then pasted back into Word or Powerpoint.

Round Trip editing with Word 2016 and ChemDraw 17

Round trip editing with Powerpoint

Not such great news is that round-trip editing with Apple’s suite of Productivity apps, Pages and keynote  is still broken. It was broken during the beta cycle with an earlier version of Pages (v5.6.1) as well so it’s not just the High Sierra-ready versions that have broken something. It seems that unfortunately due to the way that objects get transferred to the clipboard in Pages/Keynote, those objects are not editable when they get pasted back into ChemDraw.

That’s the short version but for those who are interested, I dug a bit deeper and uncovered a few clues about what parts of the process do work.

14) Structure is not editable, see object with blue boundaries only

Interestingly however, the required vector graphic information is present in the Pages file, as evidenced by the fact that whilst within Pages if you right-click on the ChemDraw image you can choose the Edit Mask function: 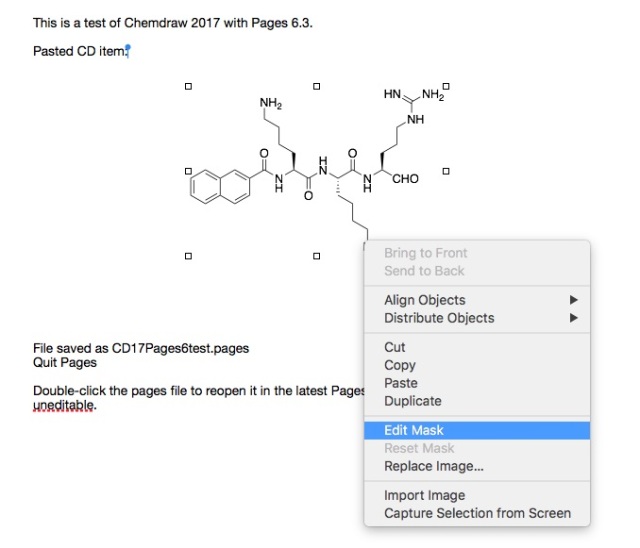 And you are then provided with the Pages Mask popup, which includes a resize by slider function. Somewhat weirdly when you drag the slider to increase the size the structure initially expands beyond the bounding box, but when  you finish, the popup disappears and you’re left with a truncated, but scaled up portion of the structure. 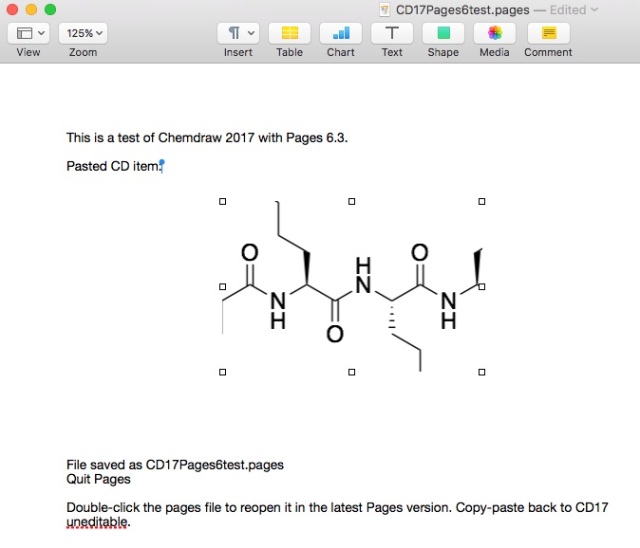 This truncated chemical structure was then pasted back into ChemDraw and unfortunately was still not editable, but did appear nicely scaled back in ChemDraw, and printed with no blurring of the lines.

Therefore it seems apparent that all the vector graphic information is present in the Pages document, but only some parts of it are transferring to the clipboard. Investigating further within ChemDraw 17, this newly pasted truncated structure behaves in some ways like a regular ChemDraw object. The initial structure above was created using the ACS template, but if you take the new truncated, but scaled up fragment back to ChemDraw and paste it in, it pastes at the scaled size. BUT, if you then use the “Apply Object Settings from…” function and choose a different template, in this case the RSC two-column format, it attempts a rescale, but gets it wrong. So there’s sufficient information placed back in the Mac clipboard from Pages that it knows it has scalable bonds, but can’t convert the information into an editable structure.