Over the course of the last several months, I have been involved in a protracted and ultimately futile attempt to have impersonator accounts shut down on Twitter. I noticed back in October that around September 2014, someone had scraped my Twitter account and created two accounts with minor spelling errors of my surname (Case 1: MartinStoemerr, Case 2: MartinStoermre), and were using them to send Twitterspam. They had stolen my custom profile header photo (one of mine of Eibsee, in Bavaria in winter), as well as my brief Twitter profile at the time, my location in Brisbane, and job description, and the link to my blog on WordPress. One of them subsequently seems to have changed my location to Melbourne but left the location as Brisbane in the bio. They also stole my custom avatar, a buckminsterfullerene that I had made in Pymol, with the colours of my football team, the Brisbane Roar.

Now this is a fairly minor case of impersonation I know, certainly nothing like the abuse that some people get online, but I stuck at the reporting process partly because it’s the right thing to do, and partly because I wanted to see what Twitter’s complaints process is like. Well I’m here to report that it’s a mess. I am going to take you through it blow by blow, just so that you can see how tedious they deliberately make this in an effort to make you just go away. The core problem that I can see is that either the two cases were dealt with probably by two different people using different interpretations of the rules, or someone negligently merged the two cases and marked them as both complete, when one in fact was not.

Either way the first thing that will happen to you if you report that someone is impersonating you is that Twitter will respond with a boilerplate email saying that you have to provide a Government issued PhotoID to prove you are who you say you are. This is a gross invasion of privacy. You want me to email you my PASSPORT or DRIVER’S LICENSE? What is the point of that? What are you going to check it against? Does Twitter have access to the relevant Australian government agencies to check these? Of course not. Could they even prove that what you sent them wasn’t in fact a neat Photoshop job? Of course not. This is just a simple case of putting you off in order to MAKE YOU GO AWAY.

5 Days later you will get an additional email entitled Case #99999999: Friendly reminder [ref:_Quardleoodleardlewardledoodle:ref], reminding you that you haven’t acceded to their demands to have your privacy eroded further. 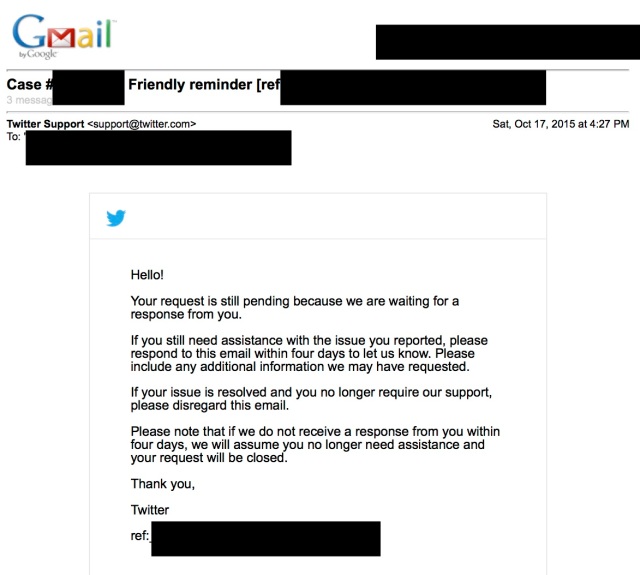 Here is where my two cases diverged. I sent identical replies to both Case ID’s that I was not going to provide them with photoID for the above reasons and that a cursory examination of the account creation dates should easily establish priority.

Case 2 was dealt with with no more than that, and Twitter shut one of the offending cases down. Case 1 however was not. And somehow that case was marked as complete. A few days later I noticed that the second account was still online (and still is). I reported this, and asked when the second account would be dealt with. Twitter replied that the case was now closed and that I had to start all over again with opening a new case file.

Which I did, only to, of course, get the same boilerplate response as I originally got. Frustrated, I sat it out, only to get the “Friendly Reminder” email again. Subtext from Twitter: SUBMIT OR GO AWAY

So I sent a very lengthy response reiterating that I was not going to send them any PhotoID, and outlined the whole scenario to that point (including copies of all the previous emails and reasoning), making sure to point out that they had already found one of my case files to be completely meritorious, so why were they asking me all this again.

They refused to do anything more without PhotoID: I.e. GO AWAY YOU PATHETIC DATA POINT, YOUR PATHETIC COMPLAINTS DO NOT CONCERN OUR INCOME STREAM 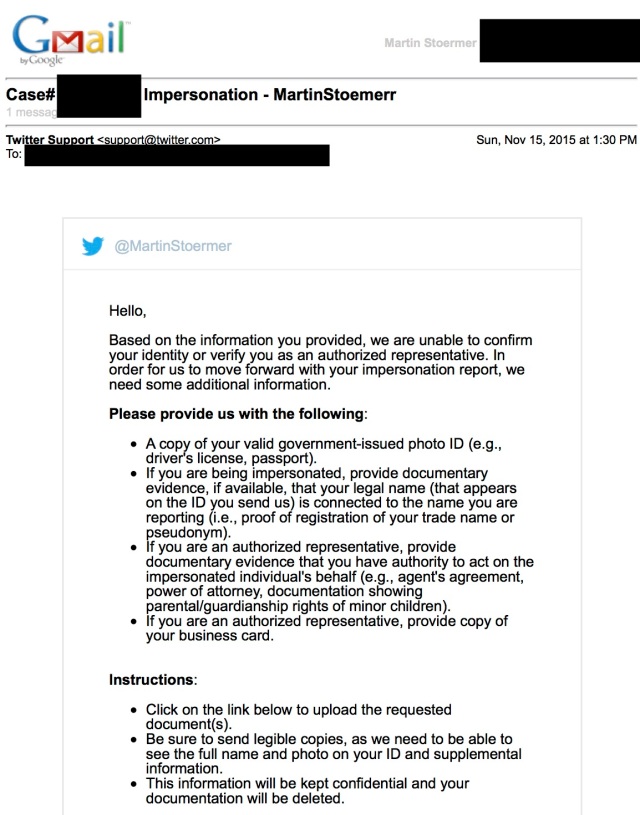 I reply once again, pointing out again that one case was dealt with already easily and asking why the second case cannot be dealt with in the same way. Chronicling of course all the case IDs along the way (for those who have lost count, Case 1 has become Case 3)

I get the same response, without PhotoID proof Twitter will be doing nothing. Apparently either my emails go straight to a bot reply service or they are digging in their heels.

I decide to up it a bit, asking them to escalate my request and provide a valid answer. Also mention that I am preparing this blog post. Stay tuned.

Fast forward to February 2016, and I send a followup email to the case ID asking why no further action has been taken. And instantly comes the reply that the case has been closed and that I need to submit a new impersonation case to @support. LATHER, RINSE, AND REPEAT. Except no I’m not going to do it. I’m just going to publish this post detailing their ineptitude and intransigence. Likely they will do nothing either. But rest assured I am writing it all down for future reference. 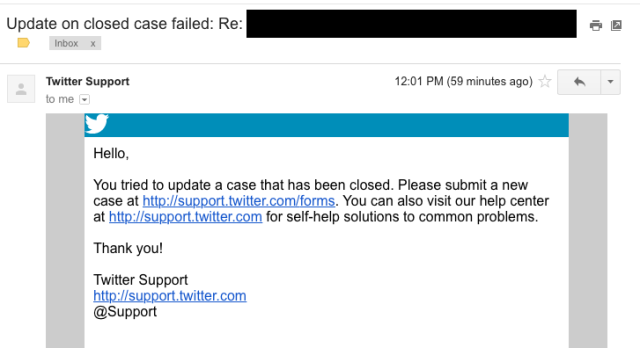 So what are these accounts? Opinions vary, but a common theme is that if you look closely at these imposter bot accounts, nearly all their “followers” are also bots. They also go dormant for extended periods, then get reactivated. This has been suggested as a tactic to game Google rankings for websites and things like Klout scores without being automatically tagged as being a bot by autoblockers.

almost on holidays
View all posts by martin →
This entry was posted in Uncategorized. Bookmark the permalink.